I just dashed off an angry letter to the Post about their recent article, UFOs exist and everyone needs to adjust to that fact. I reproduce my text below.

The above article is apparently a fairly subtle joke that has taken in the Post’s editorial team. Surely you wouldn’t post something so afactual and nonsensical without a disclaimer in a serious “Perspective” demi-editorial? Surely you should at least have had an article by a person competent in some sort of science? I find it hard to believe you were taken in.

On the off-chance you took that … set of words … seriously (I’m eliding my more strident description), may I suggest you consult Professor Massimo Pigliucci (CUNY), or Professor Steven Novella (Yale Med), or someone from the CSI (Center for Skeptical Inquiry)? Massimo in particular as a philosopher and scientist could point out both the factual incorrectness of some of the assertions, and the logical fallacy blatantly present in the phrase, “… but even those skeptics could not completely rule out the possibility that extraterrestrial activity was involved.”

I await your retraction.

The article is a hot mess of nonsense. I’m embarrassed for every newspaper editor, just because their colleagues published this waste of photons.

So I bought some groceries today, and this store has ads on the back of its receipts. I got this one. 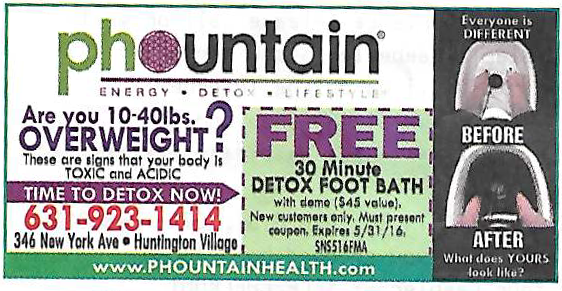 So this … establishment is claiming that overweight (but only between 10 and 40 pounds of it?) is caused by both toxins and acid?

I suppose, in some cases, overweight could be caused by real toxins. Say they cause dropsy. You just can’t remove toxins by bathing your feet in water and minerals. This is clearly the “Ionic Foot Bath” scam. They literally claim that the system draws toxins out through the soles of the feet–that is, some of the thickest, most impermeable skin the body has. It’s literally a con game. The bath shown above (illustrated better at the linked article) contains a water-based solution that turns black after you submerge your feet in it. The claim is that the discoloration is the toxins dissolved in the water. The truth is that the water changes color whether or not you put your feet in! It’s just iron compounds created the apparatus itself.

The acid part sounds like traditional pH quackery, which attributes various diseases and syndromes to the body’s being too acid or basic (pH imbalance). As Dr. Steven Novella explains here, the body just doesn’t work that way. If you’re “too acid” you’re in immediate danger of death, not just overweight.

With some trepidation I checked out their web site. Phountain Health is a pretty full-service stuff-not-actually-shown-to-work company. The first item on their site is a “Detox Body Wrap”. They sell dietary supplements, a “Vitamin D sun bed”, alkaline water, dietary diatomaceous earth (which is literally dirt they recommend you eat), and many other things. Oddly, no foot bath seems to be listed. They do list cryotherapy.

You should be ashamed of yourselves, Stop and Shop. That’s two of the three remaining major grocery chains near my home, what with Best Yet Market‘s homegrown pseudoscience.

There’s a guy I know. I’ll call him “Rick” because that is not his name.

Rick is a naturopath.

Naturopathy doesn’t work. It’s a combination of sub-Hogwarts magic with some training in real stuff. The leading US school of Naturopathy is Bastyr University. Here are some things in Bastyr’s course offerings:

There’s much more, that’s the result of a few minutes of flipping through their course descriptions. Interestingly, the curriculum itself looks incredibly medical. The “Physical Medicine” course sequence sounds like something a science-based physician would take, until you read the description and find out it it includes “muscle energy technique” and other woo-woo

There’s no good evidence that any of the topics listed do anything at all, except cost money and possibly delay getting real medical treatment. Well, OK, acupuncture can result in punctured lungs.

Now, here’s the thing about Rick that infuriates me. He’s not a fool. He has a science degree from a very prestigious university. He also has real medical training as a paramedic. I’ve spoken to him enough to know that he really cares about his patients, and that he doesn’t actually prescribe the stupid treatments like homeopathy, because he knows perfectly well that they don’t work.

Why would his not being a terrible physician bother me? Because by his being a sincere, caring, and intelligent guy he’s adding to the prestige of naturopaths. Naturopathy is nonsense. He’s endorsing what is frankly dangerous nonsense and because he’s legitimately a respected guy he gives it credibility. I don’t think Rick is dangerous to his patients himself–I am absolutely certain that if someone presents with symptoms of, say, heart failure he’ll refer to an MD or OD immediately. However … if he lends authority to naturopathy, he is indirectly promoting nonsense like anti-vaccine attitudes that can kill people. So I get mad.

What to do about it, I have no idea, except rant here.

Whenever I listen to the local news radio station, I hear ads for Quietus®. Quietus is a remedy for tinnitus. Tinnitus is a condition in which a person hears sounds, often roaring, humming or whistling, which are not perceptible to anyone else. In severe cases these sounds can interfere with hearing and understanding speech or enjoying music, or even prevent sleep. In many cases there is little medicine can do for tinnitus sufferers.

Medical conditions that can’t be easily cured by medicine are a natural target for medical nonsense. Quietus is (in the writer’s sole opinion) a fine example of something that couldn’t possibly work but is making money for its makers.

Quietus is a “dual homeopathic” medication. This means it has two supposed ingredients. However, most homeopathic medications in fact contain literally nothing. Homeopathy is an antiquated and unscientific pseudo-medical system based on these premises:

Both are silly, but the second is what makes it impossible for homeopathic “drugs” to work. In most cases, commercial homeopathic remedies are diluted so much that none of the so-called active ingredients are actually present!

Quietus’ web site contains a page titled “Quietus® Homeopathic Treatment A Study by Dr. Thomas Latino, Ph.D.” The contents are not a study in any academic sense, however, just a description of the product’s ingredients and their traditional uses.

[sic] for all the above organisms–in biology species names don’t start with a capital letter, but Dr. Latino consistently writes them incorrect. “Thuja Occidentalis” should be Thuja occidentalis, for instance.

It’s interesting reading the above-linked “Study” page because it says right at the top, “Homeopathic potencies accredit their strength and efficacy to the electromagnetic signatures of the original substrate. These are scientifically created dilutions and successions of medicines such that generally not even a molecule of the original substrate or medicine is present in the medicine.” They admit up front that their product has no active ingredients but claim that “electromagnetic signatures” of these nonexistent chemicals somehow cure tinnitus. I don’t think you’ll find any physicists or chemists who can identify what “electromagnetic signatures” even means in this context.

Notice the weird melange of ingredients, very typical of magic-mongers. It includes extracts from living things (an animal and several plants), a very simple chemical (potassium phosphate), and an organic molecule (salicylic acid).

The key single thing to notice on the “Study” page is this: the author doesn’t list any claims that any of the ingredients help tinnitus. Even accepting at face value all the claims of homeopathic effects listed, they’re for other, not-obviously-relevant disorders including asthma, pain, cancer, and arthritis! Want to see a classic example of misleading language? The author writes, “Derivations of C. Officinalis are administered to elderly patients to treat tinnitus and cardiac related disorders and have been found to have effective implications when taken to counteract swelling and other conditions that may adversely impact the workings of the inner ear.” Note that Dr. Latino does not claim this nostrum works for tinnitus! He says only that it is used for that complaint. (What the heck are “effective implications”?)

The author of this “Study” is Dr. Thomas Latino. PubMed reports that Dr. Latino has zero medical publications. A more general web search finds the same “Study” that’s on the Quietus site was also published by The Hearing Journal in 2010. HJ appears to be an industry trade magazine. It is certainly not a peer-reviewed, scientific publication. He is stated to be “a consultant” and no details are given of his degrees, or professional experience, anywhere that I can find. His only other publication that I can locate is promoting another homeopathic nostrum, this one for sciatica.

But surely the makers must have some evidence it works? Well, all they give is a bunch of testimonials. Anonymous testimonials. Testimonials are very convincing–we humans are easily persuaded by stories. Trouble is, testimonials are easily found for all manner of quack nonsense, including copper bracelets curing arthritis, Laetrile curing cancer, and stump water curing warts. To show that a medical treatment works, you need controlled and blinded experiments or carefully-conducted epidemiological studies, which simply don’t exist for this ludicrous treatment.

In conclusion: this stuff can’t possibly work (again, it has no ingredients), they present no meaningful evidence that it does work, and the only effect it’s likely to have is moving money from the sufferer’s wallet to the seller’s. Not recommended.